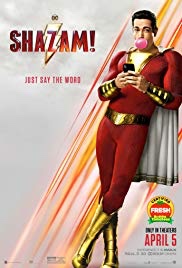 The last great big win for the DC universe was Wonder Woman and Aquaman. So everyone was kinda nervous about Shazam and though the good streak would end there. But I’m here to tell you the winning streak is still shockingly going. The dc have won another one with Shazam!! Aimed more towards children Shazam really could’ve done bad or good. It was just up to the fans and critics to choose. It’s 100% rotten on rotten tomatoes and the fans are loving it! I saw it Saturday and was shocked by how endearing and good and funny it was . The kids in this film really drive the movie and are really realistic. I would definitely give this film 5/5. And it’s kinda sad and shocking this is Zachary Levi’s FIRST leading man role. Like what’s taking Hollywood so long to jump on the train?! He’s a giant handsome hilarious talented actor who can also sing ( he played Eugene in tangled). I’m so happy for him and everyone involved in Shazam as they’re are the number 1 in the box office.👏 looks like we’re getting number 2 with the rock!!

A writer who’s also a blogger. View all posts by astoldbyshanise